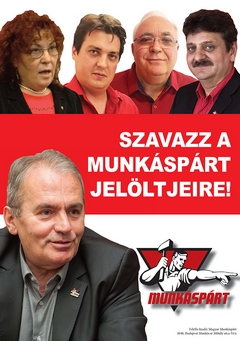 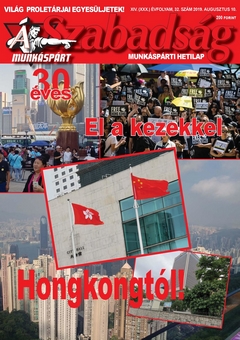 Statement of President of the Hungarian Workers’ Party Gyula Thürmer

Statement of President of the Hungarian Workers’ Party

On behalf of the Hungarian Workers’ Party I would like to thank the Communist Party of Vietnam for inviting us to Hanoi.

For us communists it is a great event to be in a socialist country. We wish you great success in realizing the strategy of the 12th Congress of the CP of Vietnam and to persist in Marxism-Leninism and Ho Chi Minh Thought, to apply creatively and develop them in conformity with Vietnamese reality; to persist in the goals of national independence and socialism.

The Hungarian Workers’ Party considers socialism a social system where the political power is in the hands of the working masses, where the majority of means of production belongs to the working people and where planning economy exists instead of market economy.

We have our negative experiences how far we can go in applying the methods of capitalism. We always share these negative experience with other parties. But we think that we should be open to any new ideas and each party should decide itself how to construct socialism.

27 years passed since the disruption of the Soviet Union and other European socialist countries. Capitalists of the world were convinced that they had liquidated socialism forever and peaceful years of capitalist flourishing would come.

We know it is not the case. Capitalism got in crisis worldwide. Capitalists try to come out of the crisis with different methods.

The US tries to solve the crisis by sustaining the U.S. dollar's supremacy and the country's hegemony in military, political and cultural fields. That’s why American capitalism is the source of turmoil in the world.

US interventions are behind unrest and disputes in many places, including the Middle East, Eastern Europe, Ukraine and here, in Asia, the South China Sea. US maneuvers in the Asia-Pacific region are just part of its overseas expansion and interventionist diplomacy to maintain its leading international role.

The logical consequence of this US policy is war. It is what we see in Syria. Instead of stopping the war and recognizing President Assad as the basic guarantee of the independent Syrian state, the US continues supporting terrorist elements and pressing Russia to be involved in the war deeper and deeper.

European capitalism is also in crisis. Some of the capitalist forces try to solve it by establishing stronger cooperation between the American and European monopolies. It is the TTIP and the CETA.

Other capitalist forces see the future in a more centralized European Union led by the German and French capital.

The third group of capitalist forces, first of all the Eastern Europeans, dream about a national way and demand much more rights and influence in the European affairs.

“Uneven economic and political development is an absolute law of capitalism.” – Lenin wrote in his article “On the Slogan for a United States of Europe”. The contemporary developments confirm this thesis.

The European Union is in crisis. European capital wants to conquest new markets in order to solve its problems. On this way they get into conflict with the Russian capitalism. They are adapting sanctions and playing with the idea of a general war against Russia.

On the other hand Russian capitalism has been consolidated and as a result Russia wants to take back its lost positions.

The Eastern European countries, the four Visegrad-countries – Hungary, Poland, Slovakia and the Czech Republic – are awakening and looking for themselves a new place in the capitalist Europe. The conflict between the Western European and Eastern European capital was inevitable.   The political war around the migration-issue is one of the expressions of this conflict.

We live in fragile situation. We cannot exclude even the most radical changes. Imagine just some possibilities!

What will happen if a war begins in Europe?

What will happen if the EU pushes through its idea on relocation and resettlement of migrants?

What will happen if the TTIP will be not only a distant threat but a close reality?

What will happen if the EU collapses?

What will happen if any other factor radically changes the political situation in Eastern Europe?

We are convinced: the communist movement should be prepared for the moment when class conflicts are strengthened and the fight against capitalism turns into a face-to-face class war.

We should see that reformist ideas and even clear reformism is present in our movement. Fortunately, it is not dominant. We should fight against the wolf in sheep’s clothing to save the ideological-political and organizational independence of the communist parties.

We should save and develop our cooperation. The fact that we have now our 18th international meeting clearly demonstrates that our movement exists and we want to rise our influence on world affairs.

We recommend to organize special forums to discuss such living issues like party-building, formation of young communists, new methods of Internet work.

Generally speaking, the Internet and IT represent not only a new political instrument but a new direction of our work. We can and should take the lead in putting them into practice.

The situation of the Hungarian Workers’ Party has improved in the recent period.

First, there is a positive change in the public opinion towards our party. The aggressive anticommunist rejection has practically disappeared. People say that we have been fighting for the interests of the working people for 27 years and our commitment to the cause of working people has not changed. It is a very big moral capital.

People allow us to participate in the elections but they do not consider us as the only political force which can change their life.  We must be patient, we must work, things will change.

Second, we have learnt how to work under modern circumstances. We have learnt to concentrate and to use in the most efficient way all material and human resources of the party.

Third, we have strengthened the political unity of the party. We  go neither with social democrats nor with liberals and social democrats. We follow our own way. We are a left and national party.

Now we are the strongest party outside of the parliament, we want to strengthen this position.

We defend the national interests of the working masses in a situation when the liberals and social democrats follow the instructions of the US and the EU and the conservatives try to monopolize the representation of the Hungarian nation.

We should explain that it is an illusion to restore sovereignty and independence in the framework of capitalism. It is also an illusion to change the EU into an organization which serves the interest of the people. We can realize the national interests of the working people only by overthrowing capitalism-imperialism.

Let me finish with words said by Lenin in 1918: “We shall not achieve socialism without a struggle. But we are ready to fight, we have started it and we shall finish it.”[1]